Financial support of our strategic cluster
The management team of ReSMiQ was expecting the decision of the Fonds de recherche du Québec – Nature et technologies (FRQNT) pertaining to the grant renewal application for our strategic cluster. The FRQNT recently inform us about the decision to renew ReSMiQ for the next 6 years with an annual contribution of $432,000.00. During the renewal process the ReSMiQ received the highest score for each evaluation criteria and the highest amount granted by the FRQNT in the 2015-2016 contest. The center’s management would like to thank everyone who has contributed in the growth of ReSMiQ and provided a significant effort in the production of this application. More details

Microfluidic day at Université Laval (May 27)
The ReSMiQ is proud to support local initiatives for training and dissemination of knowledge activities. The latest is the microfluidics half day held at Université Laval on May 27 and co-organized by Dr. Miled, in order to promote research in microfluidics. This event was also sponsored by CMC Microsystems and Quebec Section of the IEEE. The program included a poster presentation session, invited talks offered by professors Miled, Greener, Larachi and Taghavi, a presentation by B. Mallard CMC, a keynote talk offered by David Juncker from McGill, and finally a panel session on the theme of the establishment of a first workshop on microfluidics in Quebec. More details 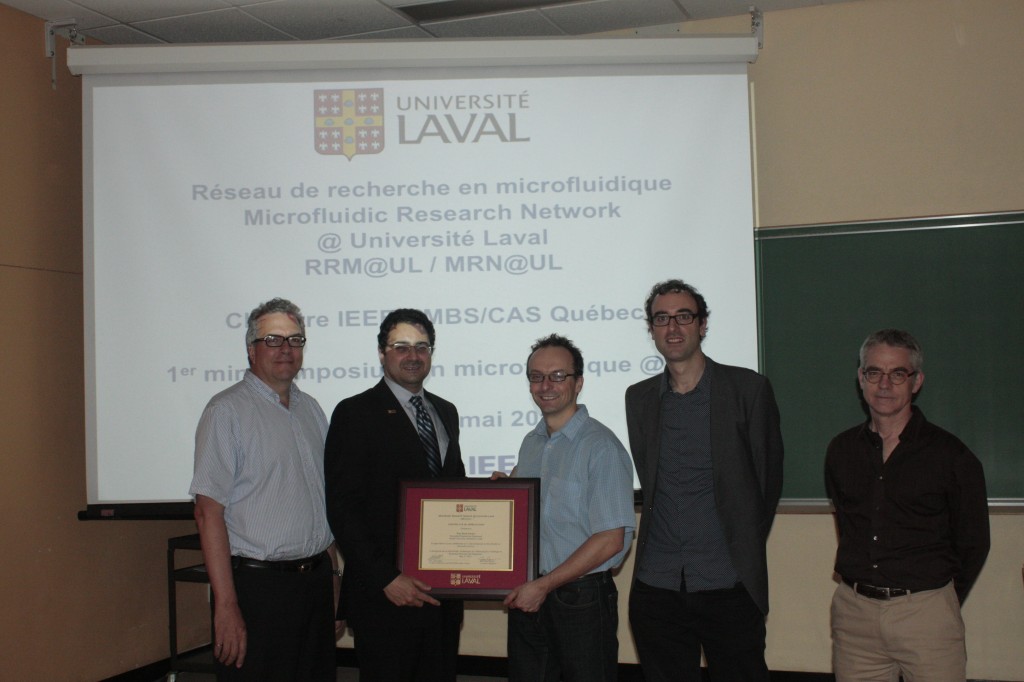 2015 ReSMiQ’s annual symposium (May 29)
We held our annual symposium during the 83rd Sawan from Polytechnique Montréal and professor Bahoura from Université du Québec à Rimouski. It was a real pleasure and with great enthousiasm that we welcomed our guest speakers, including professor Wei Shi of the Université Laval and professor Bahoura, and all 30 participants who attended this edition. On this occasion, members of ReSMiQ presented their research and exchanged views on several issues related to microsystems. Seventeen students participated in the scientific posters competition, and the judges were impressed by the high quality of the work presented. Furthermore, 3 of them have received awards for their excellent presentations. We take this opportunity to invite you to be part of our next annual symposium within the next conference of ACFAS to be held in Montréal at UQAM on May 2016. Detailed program 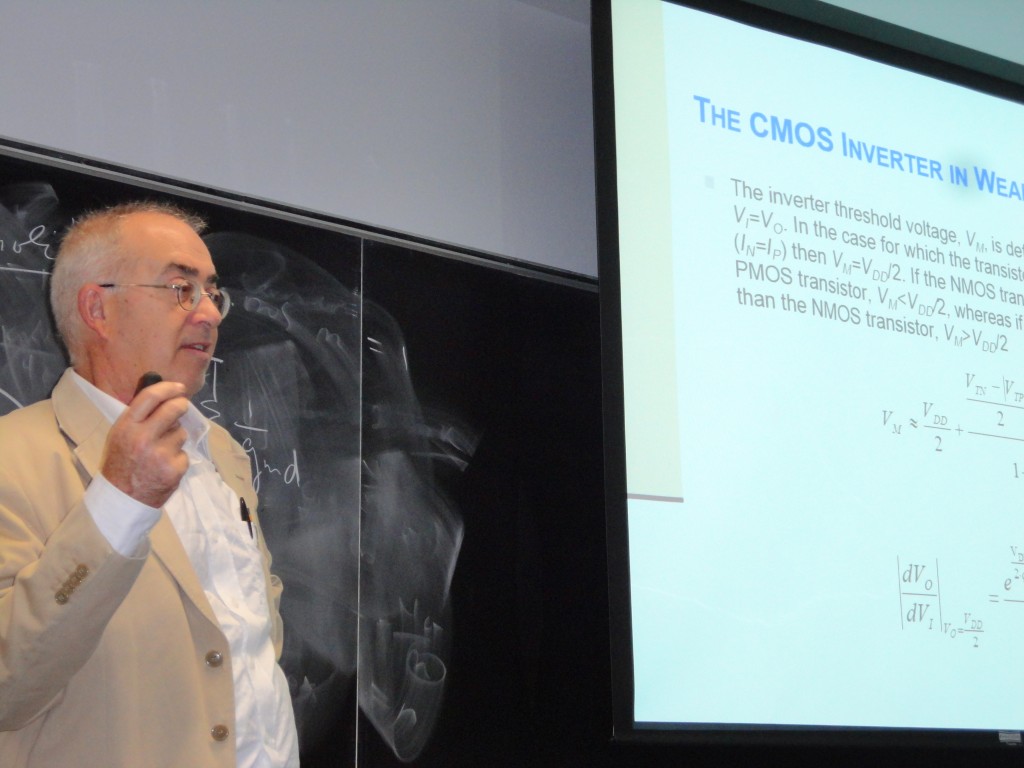 Achievement
– Dr. Fréchette from Université de Sherbrooke is supervising Andréane D’Arcy-Lepage and Mahmood R. S. Shirazi who respectively won the second place of the undergraduate student expo and the audience choice award at the ASME-IMECE, held in Montréal.

– Dr. Gosselin and Dr. Shi from Université Laval, Dr. Sawan and Dr. Savaria from Polytechnique Montréal, and 4 other colleagues received financing from the innovation fund of the Canada Foundation for Innovation for the development of shared research infrastructures at Université Laval.

– Dr. Gosselin and Dr. Miled from Université Laval were awarded the prize for best new chapter 2015 from the IEEE Engineering in Medicine & Biology Society for the IEEE CAS/EMB Quebec Chapter.

Scholarships and awards
– Microsystems Experimental Demonstration Competition
Undergraduate and graduate students are invited to demonstrate their scientific and technical expertise during the 4th edition of the ReSMiQ Innovation Day by submitting their project. More than 5 000$ in awards.
APPLICATION DEADLINE: June 10, 2015.
More details 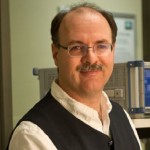 Prof. Claude Thibeault received his Ph.D. in Electrical Engineering from Ecole Polytechnique de Montreal, Canada. Currently, he is with the Electrical Engineering Department of Ecole de technologie superieure, Montreal, Canada, where he serves as full professor. He has successfully conducted several research projects supported by the industry to develop prototypes and products for wireless communication, digital video, and radar detection, among others. His research interests include design and verification methodologies targeting ASICs and FPGAs, radiation effects, defect and fault tolerance approaches, as well as current-based IC test and diagnosis. He holds 13 patents and has published more than 130 journal and conference refereed papers, which have been cited more than 730 times. He has co-authored papers that have been awarded as the best in their category at international conferences. Prof. Thibeault has been a member of different conference committees, including the IEEE VLSI Test Symposium, for which he was program chair in 2010-2012, and general chair in 2014-2015. More information

Polar codes are the first error-correcting codes with an explicit construction to provably achieve the symmetric capacity of memoryless channels. They have two properties that are of interest to data storage systems: a very low error-floor due to their large stopping distance, and low-complexity implementations. However, polar codes have two drawbacks: their performance at short to moderate lengths is inferior to that of other codes, such as low-density parity-check (LDPC) codes; and their low-complexity decoding algorithm, successive-cancellation (SC), is serial in nature, leading to low decoding throughput. In this work, we focus on improving the throughput of polar decoders. By building on the ideas used for SSC and ML-SSC decoding, namely decoding constituent codes without recursion, and recognizing further classes of constituent codes that can be directly decoded, we present a polar decoder that, for a (32768, 29492) code, is 40 times faster than the best SC decoder when implemented on the same field-programmable gate-array (FPGA). For a (16384, 14746) code, our decoder is more than 8 times faster than the state of the art polar decoder in litterature, again when implemented on the same FPGA. Additionally, the proposed decoder is flexible and can decode any polar code of a given length.

The overall architecture of our decoder is shown in Fig. 1. At the beginning, the instructions (program) are loaded into the instruction RAM (instruction memory) and fetched by the controller (instruction decoder). The controller then signals the channel loader to load channel LLRs into memory, and data processing unit (ALU) to perform the correct function. The processing unit accesses data in Formula and Formula-RAMs (data memory). The estimated codeword is buffered into the codeword RAM which is accessible from outside the decoder. By using a pre-compiled list of instructions, the controller is reduced to fetching and decoding instructions, tracking which stage is currently decoded, initiating channel LLR loading, and triggering the processing unit. In Tables I, II and III are shown comparisons of simulations results from this work and the state-of-the-art works reported in literature using SP-SC, TPSC, and LDPC codes, respectively.

Fig. 1. The top-level architecture of the decoder.

Table I. Information Throughput Comparison for Codes of Length 32768 on the Altera Stratix IV EP4SGX530KH40C2.