FRQNT Strategic cluster grant renewal
On October 28th ReSMiQ filed its application for renewal of the strategic grouping subsidy program FRQNT. Management wishes to thank all of our colleagues affiliated to ReSMiQ’s partner universities who have worked hard to ensure a significant increase of the contribution from their respective institutions. We also thank Marie-Yannick Laplante, Eric Legua and Arnaldo Mendez for the sustained effort they provided to help produce an application of quality and delivered on time. We are now preparing to welcome the visiting committee in late January 2015.

2014 ReSMiQ’s annual symposium
We held our annual symposium during the 82nd ACFAS conference. It was organized by Professor Mohamed Ait at the Concordia University. It was a real pleasure and a great honor to welcome our guest speakers, including professor Atienza of the École Polytechnique Fédérale de Lausanne, and all 30 participants who attended this year. On this occasion, members of ReSMiQ presented their research and exchanged views on several issues related to microsystems. Twelve students participated in the scientific posters competition, and the judges were impressed by the high quality of the work presented. In addition, 3 of them have received prizes for their excellent presentations. We take this opportunity to invite you to be part of our next annual symposium in 2015 to be held within the next conference of ACFAS to be held in Rimouski at UQAR on May 26, 2015. 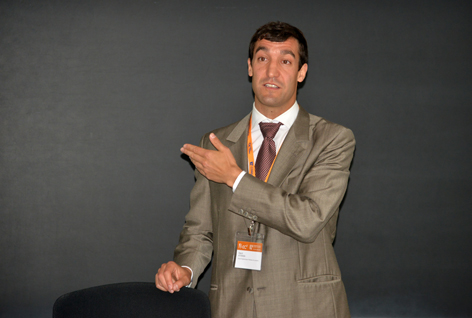 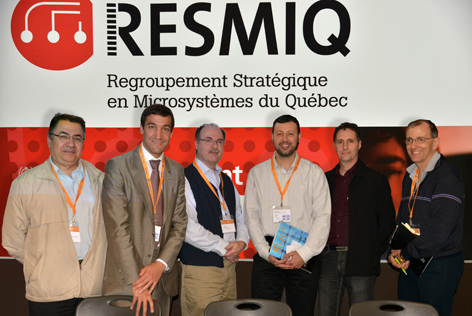 12th edition of the IEEE International NEWCAS conference
It is with great pride that we hosted the 12th edition of the international conference IEEE-NEWCAS, which took place from June 22 to 25 in Trois-Rivières, at the Delta Hotel. Launched in 2003 in Montreal, under the sponsorship of the IEEE Circuits and Systems society (CAS), it has progressively grown to become a major meeting event and is now a full-fledge IEEE conference. This world-class conference returned to Québec after a 3rd edition across the Atlantic in Paris (France) in 2013, after Bordeaux (2011) and Toulouse (2009). This 12th edition offers the opportunity to strengthen the relevance of this conference, to measure the progress after more than 10 years of scientific innovations. We have met with remarkable success with over 180 participants from over 20 countries. Note that the acceptance rate of 48% allowed the conference to achieve a remarkable level of quality. The broad spectrum of research topics covered this year attracted 236 entries from twenty-nine countries. These were sorted and evaluated by more than 350 members of the technical committee and external reviewers who conducted in-depth evaluation of each paper. The final selection has resulted in the presentation of 87 articles in technical sessions and 34 in poster sessions. It was also a great honor to welcome the world renowned speakers who shared their knowledge and their expertise with the participants. We congratulate all the members of the organizing committee for this success and we also take this opportunity to thank the sponsors for their support. It is in this spirit that we look forward to seeing you next year in Grenoble, France, from 7 to 10 of June, 2015, for the 13th edition.

More details and the photo gallery on www.newcas.org/2014 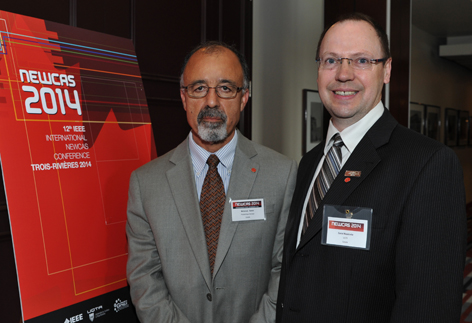 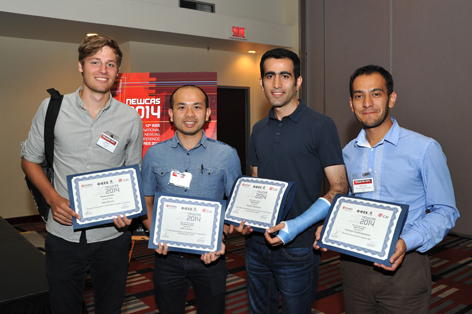 3rd edition of the ReSMiQ Innovation Day – JIR2014
On September 18th the participants of this annual event gathered at the Delta Hotel Montréal to attend the keynote speeches and the panel discussion involving representatives from academia and industry. This annual event organized by our center aims to give visibility to the research work done by the graduate and undergraduate students of the province of Quebec in the field of microsystems. Students at all levels have shown their scientific and technical expertise during a competition through experimental demonstrations in front of a jury constituted of many experts. The three best projects in each category were awarded special prizes. For this year 10 projects were presented including, for the first time, a project from the Lionel Groulx college in Ste-Thérèse affiliated with CIMEQ. We thank all the students who submitted their project as well as congratulate the winners. We hope to see more new innovations for the next edition to be held September 17, 2015. 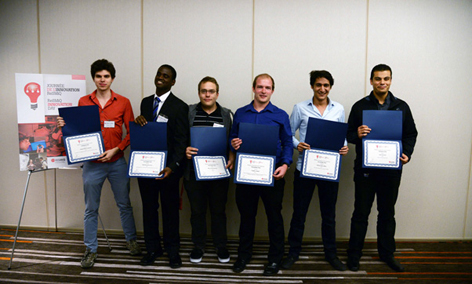 Thanks to all participants for this success! 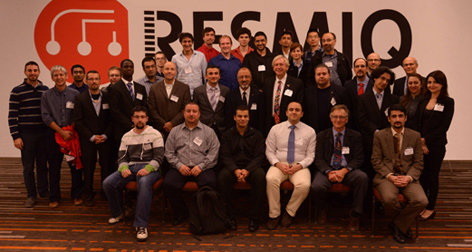 – Drs. Sawan and Savaria from Polytechnique recived a strategic grant from NSERC.

– Dr. Martel from polytechnique has been elected Fellow IEEE.

– Dr. Sawan from Polytechnique was awarded the 2014 prize for excellence in research and innovation from École Polytechnique de Montréal.
More details

– Dr. Sawan from Polytechnique in collaboration with colleagues in Brazil received the best paper award at LASCAS’14.

– ReSMiQ organized in collaboration with the Montréal Chapter of the IEEE Solid state circuits Society (IEEE-SSCS) on November 10, 3 distinguished lectures presented by Jan M. Rabaey from University of California Berkeley, Jacob R. Baker from the University of Nevada and Ullrich Pfeiffer from the Wuppertal University.

Title: The Innovation is in the Mind – The Converging Trajectories of IT, Neuro and Nano 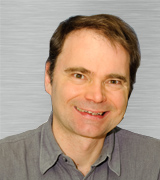 Yves Audet received the B.Sc. and M.Sc. degrees in physics from the University of Sherbrooke, QC, and the Ph.D. degree from Simon Fraser University, BC, Canada. He was a researcher at Mitel Semiconductor, Kanata, ON, Canada, where he was involved in the design and characterization of mixed signal CMOS circuits. He is an Associate Professor in the Department of Electrical Engineering, Ecole Polytechnique de Montreal, QC, Canada. His research interests are mixed signal circuits, CMOS image sensors, polymer printed electronics and radiation tolerant FPGA circuits for aerospace systems. 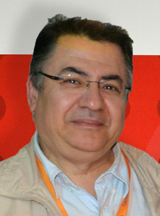 Mounir Boukadoum is Full Professor Microelectronics Engineering at the Department of Computer Science, UQAM. He studied physics in Algeria, before switching to electrical engineering in the United States and receiving the Masters degree from The Stevens Institute of Technology in 1978 and the Ph.D. degree from The University of Houston 1983. He joined UQAM in 1984 and was Director of Microelectronics Programs for three three–year mandates, launching UQAM’s only bachelor of engineering program in 2002. He was director of the Ph.D. Program in Cognitive Informatics from 2006 to 2009, and Associate Department Chair for Research in 2007–2008. He was also Executive Member of the Microsystems Strategic Alliance of Quebec (ReSMiQ) from 1998 to 2013, and acting chair in 2013. He is currently President of the Montreal chapter of the IEEE Computational Intelligence Society. Prof. received the Outstanding Teacher Award from the Faculty of Science at UQAM in 2009.

Below is a selection of publications in recent years followed by a representative paper of his work.

NOVELTY – The photodetector (Fig. 1) has substrate contact that is provided along surface of substrate spaced apart from charge collectors (N, c1, c2) to allow the current to flow between collectors and the substrate contact. A non-conductive electrode (e1, e2) is positioned along the surface of substrate between collectors, and separated from the substrate by an insulator. The electrode is adapted to apply an electric potential to substrate and cause charge carriers generated by the light source to travel towards charge collectors, such that collectors can differentiate carrier concentration within the substrate. USE – Spectrometer, spectral image sensor and color image sensor (all claimed). ADVANTAGE – No optical filter is required, the color detection principle is based on the intrinsic wavelength absorption properties of silicon where long wavelengths (red) penetrate deeper than shorter ones (blue). Hence, the collectors allow the detection of carriers generated at different depths as it is demonstrated by finite element modelling (Fig. 2). 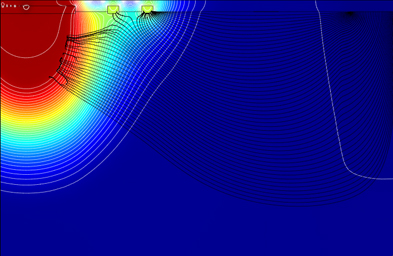 In this paper, we investigate the operant conditioning (OC) learning process within a bio-inspired paradigm, using artificial spiking neural networks (ASNN) to act as robot brain controllers. In biological agents, OC results in behavioral changes learned from the consequences of previous actions, based on progressive prediction adjustment from rewarding or punishing signals. In a neurorobotics context, virtual and physical autonomous robots may benefit from a similar learning skill when facing unknown and unsupervised environments. In this work, we demonstrate that a simple invariant micro-circuit (Fig. 1) can sustain OC in multiple learning scenarios. The motivation for this new OC implementation model stems from the relatively complex alternatives that have been described in the computational literature and recent advances in neurobiology. Our elementary kernel includes only a few crucial neurons, and synaptic links, and the integration of habituation and spike-timing dependent plasticity as learning rules. Using several tasks of incremental complexity, our results show that a minimal neural component set is sufficient to realize many OC procedures. Hence, with the proposed OC module, designing learning tasks with an ASNN and a bio-inspired robot context leads to simpler neural architectures for achieving complex behaviors.

Fig. 1. Suggested ASNN to achieve OC procedures in varying contexts with a minimal component requirement. This specific situation results in increased behavior when followed by a reinforcer. The positive reinforcer consists of light perceived from a visual sensory neuron. The action is simulated with a sound emission. 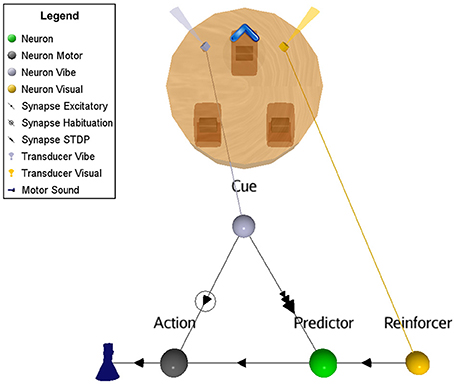